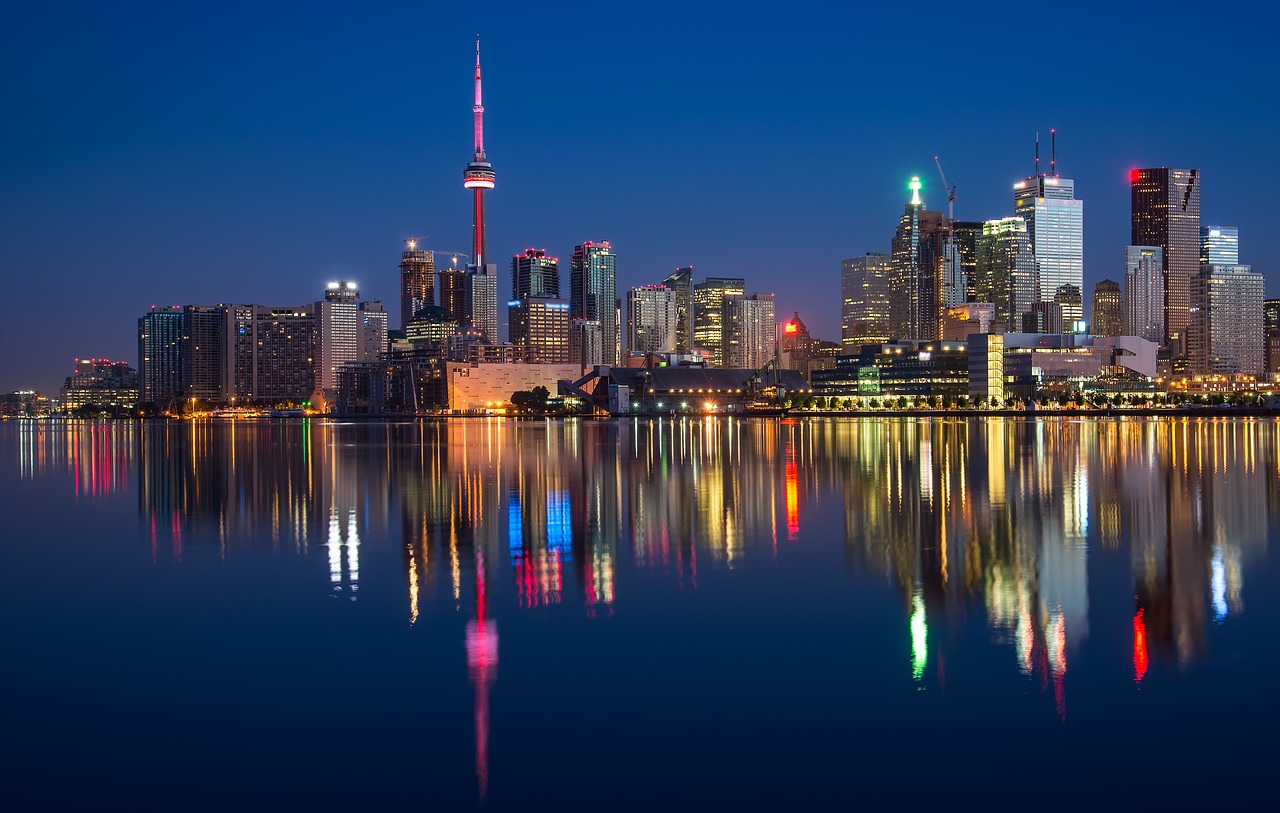 Toronto, Canada’s largest city, is beautifully situated on the shores of Lake Ontario. Diverse life, culture, parks, museums and much more invite you to the lively city with lots of green spaces. The culinary offer is also impressive, whether Canadian cuisine, Mediterranean specialties or the wide range of Asian delights, the metropolis of Toronto fulfills every wish, whether lunch or a fine dinner in the evening.

It is visible from afar, the symbol of Toronto, the largest city in Canada and the capital of the province of Ontario. We are talking about the CN Tower, the Canadian National Tower (French La Tour CN). The television tower, which is located in the south of the city near Lake Ontario. At the same time, from 1975 to 2007 it was the tallest free-standing and non-guyed structure in the world. The name CN Tower originally comes from the Canadian National Railways, the Canadian railroad company, they built the tower together with the Canadian Broadcasting Company (CBC) and should only serve to improve television reception and various radio lines. Public access was not planned. Today the CN Tower has long been a landmark of Toronto, the main tourist attraction and an architectural highlight. Up to two million visitors conquer the various levels, the viewing platforms and the revolving restaurant every year. Another highlight is the EdgeWalk at the CN Tower (see separate sight here in the report).

The CN Tower is located near Lake Ontario, and in its vicinity is the Rogers Center, which also characterizes the cityscape, and the main artery, the Gardiner Expressway. The CN Tower is connected to Union Station, Toronto’s main train station, via a skywalk with the underground pedestrian system PATH (see separate attraction here in the report). Also in the vicinity of the imposing tower, visitors will find the John Street Roundhouse, a roundhouse built in 1897 and restored in the mid-1990s. It houses a brewery and historic locomotives. The viewing platforms offer an impressive 360 view of Toronto, Lake Ontario and the Toronto Islands. The floor on the first viewing level has been made of glass since 1994, to step on it requires a head for heights and a little courage.

Lake Ontario is the smallest in terms of area, but the second smallest in terms of volume and depth. Lake Ontario (English Lake Ontario, French Lac Ontario) is connected to Lake Erie by the Niagara River. Lake Ontario is drained by the mighty St. Lawrence River, which flows into the Atlantic. Lake Ontario takes its name from the First Nation of the Wyandot, in their language Ontario means “great lake”. The state border with the USA runs through the lake, the larger part of the lake with 9,969 square kilometres is in Canada, the lake portion of the USA is 9042 square kilometres. In addition to the main tributary, the Niagara River, the lake, which is up to 244 meters deep, is fed by the Trent River, the Genesee River, the Oswego River and the Salmon River. The lake, which is often frozen over in winter, is a heat store for fruit and wine-growing in the Niagara region in summer. Lake Ontario is very important to the city of Toronto. Its water is used to supply drinking water and, in summer, to cool office buildings. And of course, the lake, with its promenades and beaches, is a special draw for Toronto residents and the many tourists who visit Canada’s largest city each year.

If you fly into Toronto, you should visit the Royal Ontario Museum. It is one of the largest museums in North America and has been a special eye-catcher in Toronto since it was added as part of the “The Crystal” project based on a design by the world-famous architect Daniel Libeskind. We’re talking about the Royal Ontario Museum, most of them just called ROM. The museum has an ethnographic collection on cultures from all continents that is important well beyond Canada. Located next to Queen’s Park and the University of Toronto, the original building was erected in 1912, and the museum was inaugurated in 1914. The museum sheds light on the history, culture and biodiversity of Canada from the earliest times to the present day in a family-friendly manner, and the ROM also houses a large, impressive collection of dinosaurs. Children can work as geologists in the rooms of the museum, a lot is done for children in the other natural history departments too, and museum content is conveyed in a child-friendly manner. A total of over six million exhibits are waiting for the visitor; it is worth planning a day at the Royal Ontario Museum. In addition to the permanent exhibits, the museum also shows temporary exhibitions on a wide variety of topics.

education, Conservation and Research. With this motto, the Ripley’s Aquarium of Canada presents a multi-layered underwater world with over 20,000 aquatic animals. The Ripley’s Aquarium of Canada is a mixture of fun and entertainment, but also an invitation to protect, respect and preserve the underwater world. Locals and tourists of all ages will find the longest underwater observation tunnel in North America with more than 5.7 million litres of water in the aquarium. Besides, the underwater observation tunnel offers more than 100 interactive ways to learn more about horseshoe crabs, sharks, cleaner shrimp, stingrays and other aquatic animals. On opening days, visitors are entertained with a diving show that takes place every two hours. Nine water basins show a cross-section of saltwater and freshwater areas around the world, from the basins of the great lakes, which contain 20 percent of the world’s freshwater supply, including in Lake Ontario on Toronto’s doorstep to the subtropical coral seas.

The Eaton Center is conveniently located and easily accessible on Yonge Street. The Eaton Center has a huge selection of different shops, clothing stores and restaurants in a historic mall with a glass roof flooding in with light. City shoppers will find everything their hearts desire here. From Roots Canada to Abercrombie, from Zara to Victoria’s Secret, you can find everything that has rank and name. The Eaton Center invites you on a day trip due to its size and variety of shops. Even in bad weather, the Eaton Center is a suitable excursion and shopping location. There are many other attractions near the shopping center. Furthermore, there is direct access to the PATH underground system in the center, the paths inside are part of it. The Eaton Center, one of the most important shopping centers in North America, is worth a visit. With a million visitors weekly, the Eaton is one of Toronto’s most popular tourist attractions.

The multi functional Rogers Center sports arena is a defining feature of the cityscape next to the CN Tower. Until 2005, the dome building, with its automatically fully opening roof, was called SkyDome. In 1989, after two and a half years of construction, the stadium was opened as a counterpart to the Olympic Stadium in the urban rival Montreal. The Canadian $ 600 million investment soon ran into financial difficulties, with the Ontario recession in the 1990s sweeping then Prime Minister David Peterson out of the office and causing huge problems for the city. In the end, there was bankruptcy protection for the stadium, at the end of 1998 Sportsco International LP bought the SkyDome for $ 85 million out of the proceedings. In 2004 the telecommunications company Rogers acquired the stadium. In 2005 the SkyDome became the Rogers Center. The Rogers Center is now home to the Toronto Blue Jays (baseball) and the Toronto Argonauts (football). Besides, various sporting events, trade fairs, rock and pop concerts and other events take place in the Rogers Center. The works of art inside and outside and at the Rogers Center are also famous. At the northeast and northwest entrances, there is a row of gold-colored sculptures showing larger than life fans in poses of celebration and jubilation. The Canadian artist Michael Snow created “The Audience”.

Top Travel Destinations in the World