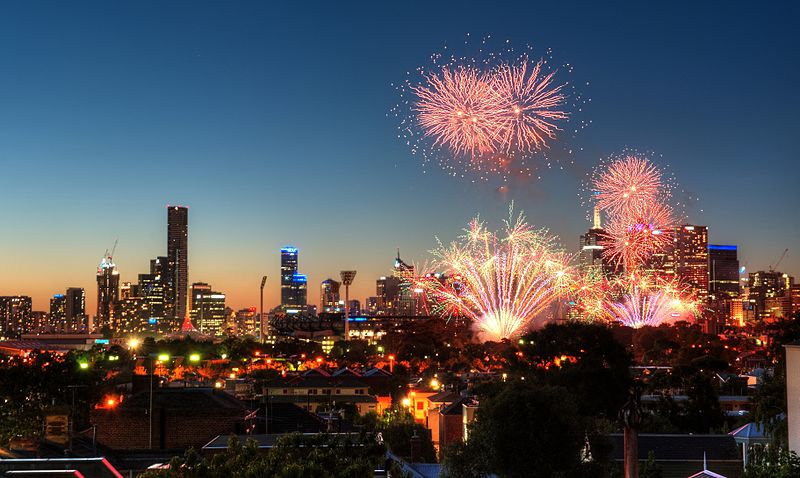 In sharp contrast to Sydney’s sun and surf, Melbourne is an intellectual, artsy and vibrant city. Fiercely diverse and multicultural, it’s both conscious and trendsetting and has an abundance of museums and galleries, as well as a dynamic late-night culture.

To many, Melbourne is the sporting and cultural capital of Australia, and we’re inclined to agree. Offering everything that you need to enjoy both a city break and a longer-stay holiday, Melbourne is the ideal destination if you want to celebrate NYE 2020 in truly cosmopolitan style.

If you’re travelling from the Northern Hemisphere, you’ll definitely appreciate spending NYE in Melbourne since it takes place during the Australian summer. The rest of the world’s eyes might be on the fireworks over Sydney Harbour come 00.00 on 1st January 2020, but the half a million people who take to Melbourne’s streets really know where the party’s at.

Another great thing about spending the last night of the year in Melbourne is the abundance of things to do that suit every budget. If you fancy splashing out, book a party cruise along the Yarra River for the best view of the celebratory fireworks. Take a ride on the Star Observation Wheel and gaze in awe at both the cityscape and the illuminations, or book your ticket (in advance, mind you) for a spot on the Eureka Skydeck—the highest observation deck in the city. If you’d rather party till dawn, you can spend the night at one of the legendary nightclubs in the city that host NYE parties. Alternatively, join the all-night celebrations along the Southbank, Federation Square, Alexandra Gardens and Docklands.

The suburbs of Melbourne

One of the most charming aspects of Melbourne is that it’s made up of a collection of unique and very distinct neighborhoods, each of which has its own character and brings something different to the city. If you don’t manage to make it down under in time for the big day, you’ll still find a lot to enjoy and discover by exploring each of the different suburbs.

Melbourne’s Business District is often the first port of call with visitors to the city. Home to the Royal Gardens, high-end shops and truly delicious culinary delights, it’s easy to see why it attracts so many tourists. Head on over to the vibrant and cosmopolitan Carlton and get a taste of “Little Italy” Australian-style. It’s a well-known fact that Melburnians take their coffee very seriously, and you’ll find the best coffee shops and cafés in the city scattered around in this district. Additionally, the bohemian Fitzroy—home to the Melbourne Fringe Festival—is where you’ll find Melbourne’s alternative arts and culture scene. It’s also a great spot to pick up some unique fashion thanks to its numerous vintage clothing stores, and there are some great finds to be had in its many secondhand bookshops.

We couldn’t discuss travelling to Melbourne during the new year period without mentioning the Australian Open. This iconic tennis grand slam has kept audiences in the thousands entertained for over 100 years, as the very best female and male elite players in the world battle it out on court for prize money and prestigious titles.

The action at the “happy slam” happens from 20th January to 2nd February on courts at the famous Melbourne Park, including the blue-court Rod Laver Arena. With the likes of Novak Djokovic and Serena Williams being some of the hotly-tipped competitors to win the singles titles next year, the Australian Open 2020 will—as it does every year—mark an exciting start for the Grand Slam calendar.

Another highlight of a trip to Melbourne is the opportunity to wander around its extensive network of museums and galleries.

There are free exhibitions for everyone to enjoy at The National Gallery of Victoria at Southbank, with its global collection of works and exhibits, as well as at the more interactive Australian Centre for The Moving Image at Federation Square. If you want to find out more about your host city, the Melbourne Museum is the place to do it. This sprawling complex of exhibitions, cafés, cinemas, an amphitheatre and lots more is not just the biggest in Oceania, it’s the largest in the Southern Hemisphere.

Putting a unique spin on cultural centres are Captain Cook’s Cottage and the Lyon Housemuseum. Cook’s Cottage is the oldest building in Australia and was first built in England in 1755. It was brought to Melbourne, brick by brick, in 1934 and has stood there ever since. Meanwhile the Lyon Housemuseum quite literally shows you how the other half lives. The actual home of architect Corbett Lyon and his clan, the house opens several times a month to showcase the fabulous collection of contemporary art that Lyon has established over the years. Bookings are essential for this one, since tours fill up quickly.

How to dress for the top 5 luxury travel destinations